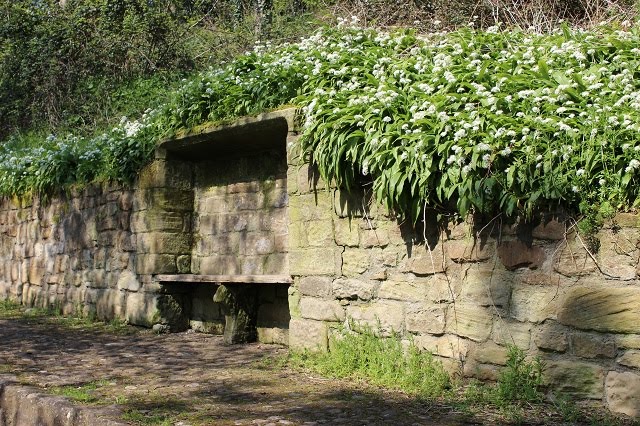 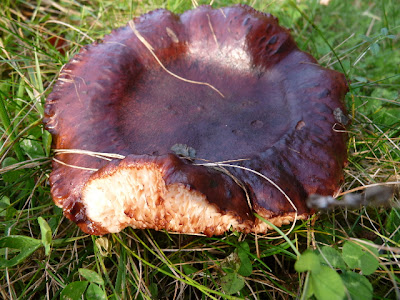 Lack of any significant frosts have meant some Autumn fungi are still flourishing well into Winter though many species can be found throughout the year. I believe the above species is Russula turei growing in conifer woodland at Stobswood. Another numerous species growing here this Autumn has been Rufous Milkcap. 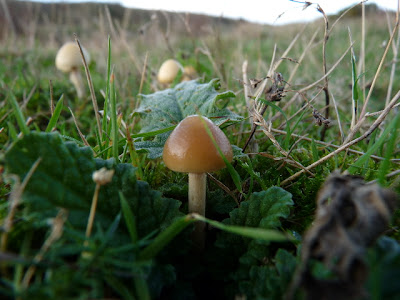 Another mystery species growing at Stobswood but possibly Yellow Fieldcap growing at the brickworks. 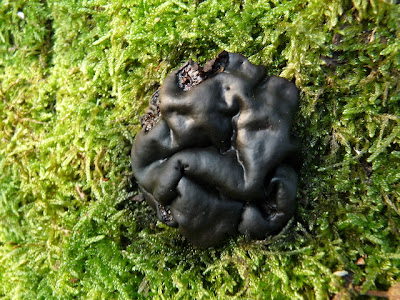 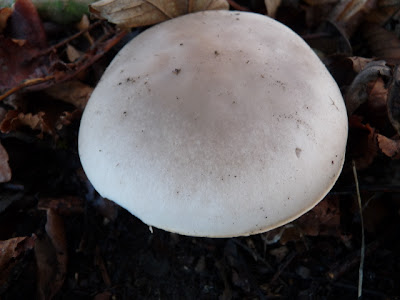 Poplar Fieldcap one of many growing beneath Poplars and Willows at Abbey meadows, Morpeth. Working over Christmas so I haven't been out much but there was a nice drake Goosander on the Wansbeck at Oldgate today. There was a flock of 11 Greenfinches along Abbey meadows this morning, it may vary from different localities but they have become scarce around here in recent years.
Posted by abbey meadows at 14:00 No comments:

Bullfinches at the tip 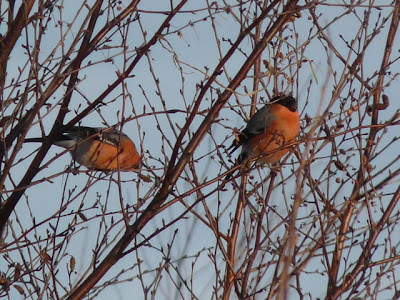 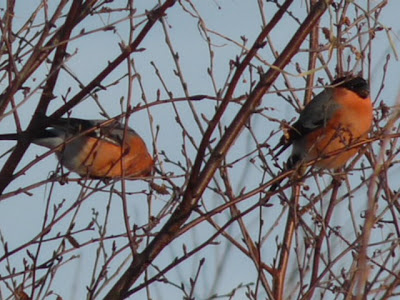 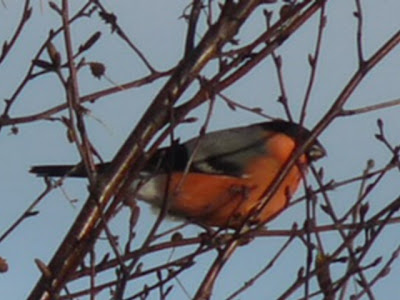 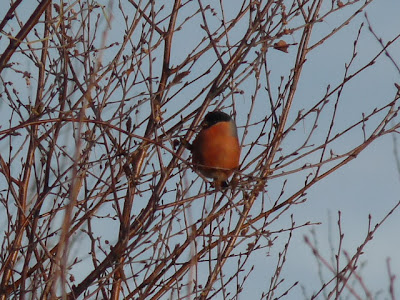 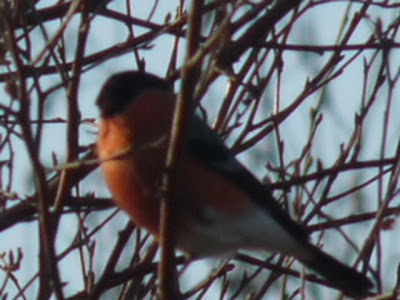 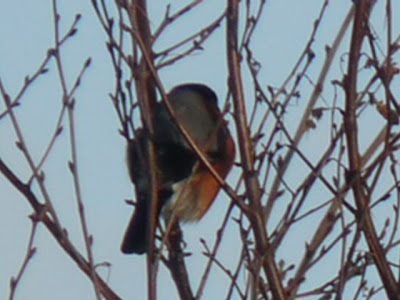 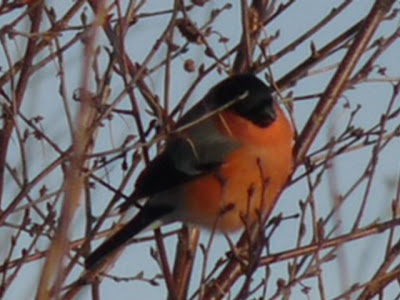 I started yesterday at Widdrington tip and after a few minutes noticed a Short eared Owl quartering the foot and mouth plantation next to the new road. In the tip itself I came across 4 Bullfinches which were quite approachable and making barely audible piping noises. They looked large but there was nothing to compare them with and all 4 birds, 3 males and 1 female looked the same size. Despite being fairly close they were difficult to photo as they were adept at hiding behind twigs. Other birds here were Thrushes, hundreds of them with Fieldfare, Redwing, Blackbird and Song Thrush. There were 3 Herons and 3 kestrels here looking for voles.
I then went to East Stobswood to look at the Geese but the sun was too strong to have a good look. I then went to Maidens hall lake to count the Geese. I counted 341 White fronted Geese twice but could only see 2 Bean Geese. I went around to the other side to see If I could view them better but returned shortly after and Alan Tilmouth was there. After a chat we managed to see about 12 Bean Geese but there could have been more as many birds were roosting on the waters edge. Also a flock of Pink footed Geese and 12 Barnacles and 3 Bar Headed.
When I got home and looked at the photos I wondered if the Bullfinches were 'Northern' they all showed some features, despite the bright sunshine the extent of the red colouring stops at the belly showing a large patch of white on the flanks and undertail joining the rump above. They all look longer tailed and have a broad white wing bar with the 'saw tooth' secodary coverts along the edge of the wing bar. They all look 'humped back and overfed' and the bottom two pictures show the large extent of the grey upperparts going well beyond the nape and despite shadows from the strong sunlight the extent of white from the underparts wrapping around the rump. All were sporting large conical bills which the bases were lost in the 'fat feathery' face. They were feeding continuously on Birch. Could all 4 be Northerns? I'll wait to see what others think.
Posted by abbey meadows at 18:03 4 comments:

A new bird for Stobswood 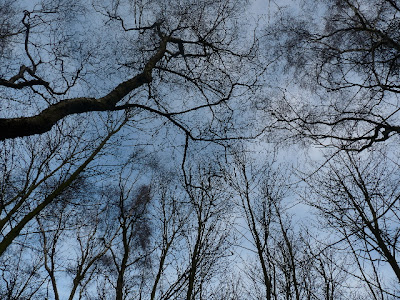 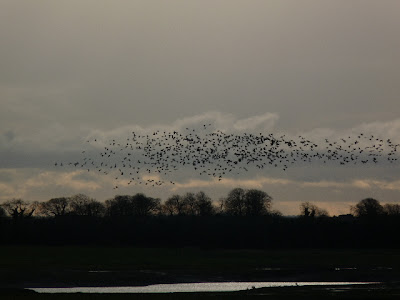 They settled on the former opencast land opposite Norwood farm
I cannot keep away from the old haunts and checking out the newly created ponds on former opencast land in the Stobswood area. On Friday I viewed the Geese from East Stobswood and began counting. There were 770 Pink footed Geese, 7 White fronted Geese and 2 Bean Geese (possibly 4). This is not the first time I have seen White fronted Geese over here, I once had a flock of 6 birds West over Felton Lane in the mid nineties but I was delighted to see the Bean Geese as I have never seen these in this area. Onwards to Woodside lake near Maidens hall and the 300+ flock were still here. IF was here and after a shivering 20 minutes I manged to see 6 Bean Geese among them and one of the White fronts was a Greenland. There was a fine Peregrine which never moved from a grassy clump behind Maidens Hall farm. 2 Whooper Swans were on the lake. Good selection of other species of Geese here. 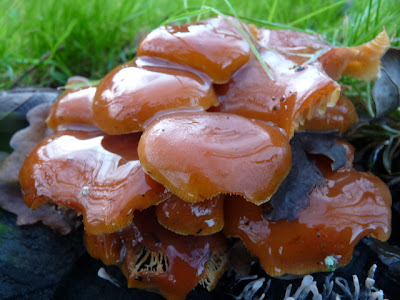 Back at Abbey Meadows and the early frosts always bring out Velvet Shanks, This shot was taken after a heavy shower.
Posted by abbey meadows at 19:03 No comments: 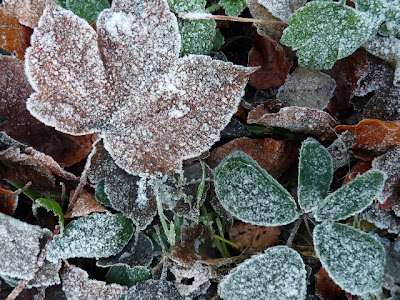 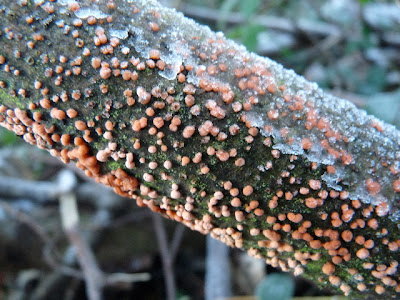 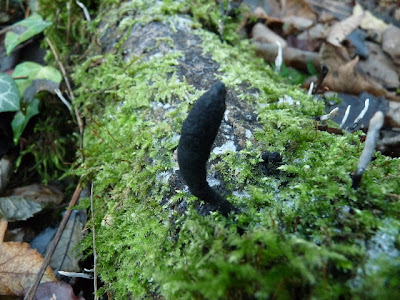 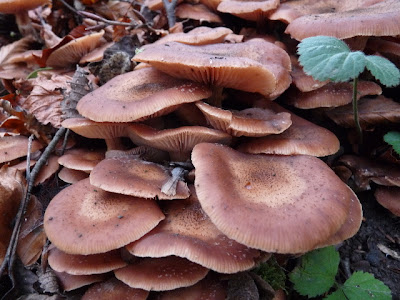 Sheathed Woodtuft...sometimes difficult to see among the dead leaves 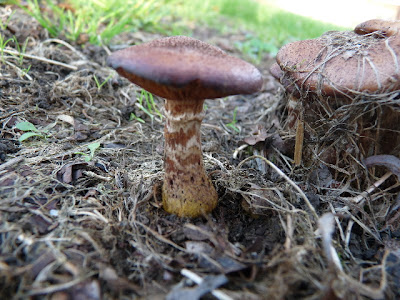 Cortinarius sp...hundreds growing beneath Willows and Birches at Abbey Meadows
With winter firmly embedded in up here the bulk of the fungi have gone but there are still some good species in the woods around Morpeth to be found. I'm a week late with this post. I have been checking the ponds at Stobswood and had some good sightings at the new Woodside lake on the former Maidens Hall opencast site at West Chevington. The highlight were the White fronted Geese with about 320 counted, possibly more. I was joined by ADMc here and this is the first time I have encountered more than 8 birds, not even getting into double figures in the county in the past and this is one of several flocks in the county at the moment. Around Morpeth the Tawny Owls are vocal with birds calling from every woodland surrounding the town. One was sitting in a Pine tree early one morning at Cottingwood. I have also seen a couple of Woodcock here at dawn.
Posted by abbey meadows at 09:36 2 comments: